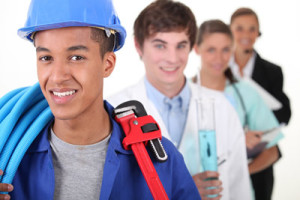 Yes, your average young person loves a job and he or she is good at it. But that doesn’t necessarily mean it will produce a good living. These are among the findings of a new WalletHub.com entry level jobs survey that tracks the most and least promising careers.

For instance, knowing about taxes and the web will be an advantage for new graduates, says WalletHub.com, a financial consumer information website. And web applications designer, drilling engineer and tax attorney are among the most promising careers for those staring out, according to the report, “Best and Worst Entry Level Jobs.”

“Some of the best jobs are providing both short term benefits, but more importantly they are really good at helping a young person develop skills that will help a career over the long term,” according to Odysseas Papadimitriou , CEO of WalletHub, a financial information and consumer credit website.

However, teller, tool and die maker and policy processing clerk are among the worst entry level jobs, he said. These jobs, he added, are limited. They demand few skills. “You need a job that will teach you a broad skills set,” Papadimitriou added.

And the search for more skills, said a college official who works with students looking for a career, should begin before graduation. Students should try to obtain an internship and acquire job skills, says Douglas Ricci, career development specialist at Rutgers University. “Waiting until after graduation, a student misses out on many opportunities that other students have been able to seize.”

The WalletHub.com report comes at a time when the American youth jobless rate is 15.5 percent and more than a third of millennials continue to live with their parents because of a difficult job outlook. Millennials, or those who are part of Generation Y, are generally defined as people born between in the early 1980s or just after the turn of the century.

And many of these young people may be forced to live with mom and dad for a long time even after graduation if they choose certain jobs that promise little career advancement and or pay very little. These include, according to the survey, claims processing clerk, new accountants representative, consumer loan processing clerk, college teaching assistant, driver and teller.

What are the common characteristic of these jobs with little income and even smaller future? They are all jobs in which computers can easily replace workers.

“Young people need to realize that, if it is tough today making a living as a teller, you probably won’t be able to make a living at all in five or ten years,” Papadimitriou said. He noted that young people choosing a profession should consider what will happen to it in a field over the next few decades. Professional drivers are probably at risk. That’s because self-driven cars could take over. “Anyone making a living driving cars or trucks could be out of a living in 20 years,” according to Papadimitriou.

By contrast, many promising jobs will benefit, he added, from the use of computers and the presence of the web. Writing for the web, for example, is a job the survey lists as having the “most income potential.”

Others in that promising category are consumer loan officer, employee relations specialist and geophysicist. Parents and their teenagers must consider these factors, job experts said. And they should do so before spending tens of thousands of dollars on tuition and making a long-term commitment to a course of study.

“Students and parents alike must consider the return on their education investment when planning their careers, and the process needs to begin in high school. It must then continue, and in fact come to a head, when it comes to the rite of passage that is finding an entry-level job,” the study said.

Still, finding the job one loves, one that also provides a good income, is a worthwhile goal, the report concludes. “The question is how to go about obtaining such things in this uber-competitive job market.”