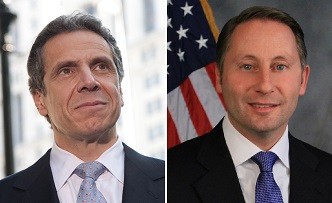 That’s what New York’s political clown class—-the stars of the New York circus—are. Most are part of a ruling class. They are career pols in America who, as soon as they leave college or law school, get on the public payroll and expect never to leave it (Examples: former Congressman, Anthony Weiner, Senator Charles “Chuck” Schumer and, of course, our governor, Andrew Cuomo)

In a recent column in this space I detailed how much I was enjoying the clowning of New York Governor Andrew Cuomo, whose political primary circus recently concluded with his defeat of primary opponent Zephyr Teachout. This came after our esteemed governor refused to debate Teachout or even to acknowledge that anyone was even running against him in the primary as he seeks a second term presiding over the pricey Empire State. New York is a place of endless taxes, one that makes war on middle-class people and small businesses. (By the way, the governor wasn’t even expected to debate his opponents in the general election. But more on this anon).

Cuomo, with endless amounts of money and all the advantages of incumbency, easily won the primary. This happened despite the governor losing my critical vote, which was much sought after if one is to judge by the endless amounts of junk mail and irritating recorded phone messages I received here in my Bunkerland abode, deep in the heart of Central Queens.

My vote was carefully considered. I figured as long as I was going to the circus why not enjoy myself and write in a comedian (I voted for Lou, “Hey, Abbott,” Costello). Still, it was a bittersweet victory for the governor seeking to win another four years as lord of the Hudson at Albany.

Will Someone Please Vote?

Most people seemed to agree it was a rigged contest. Only about six percent of those eligible to vote bothered to participate in the farce we call elections here in the state of Boss Tweed, George Washington Plunkitt and Donald Manes. That’s the norm here and in many other parts of the country.

Poor voter turnout often happens here in elections in the rest of our formerly free republic. And our professional politicians understand it has become a big problem. Indeed, pols know that millions of American voters are losing faith in a process. They stay home on election day, engaging in what they believe are more important activities such as watching the paint dry, working on football pools or knocking down some cervezas.

That’s because the electoral process tends to favor the ruling parties, the incumbents.

I’m falling into one of the euphemisms that George Orwell used to pinpoint in masterful works such as “Animal Farm” and “1984.” He called this “Newspeak,” a political language of lies.

Yet, once in a while, maybe on a big snow day in July, you’ll get a pol to concede that the system is biased in favor the incumbents. Take the redistricting of a state. Who does it? A third party unconnected to the political class? No senor! It is traditionally done by the party in power. And ruling parties always want to protect their power.

A Political Joe Explains It All

Some 35 years and 35 pounds ago—-when I was a young reporter in New Jersey—I asked the then state Senate leader of the New Jersey Legislature, democrat Joseph P. Merlino, how the state would be redistricted. “Well, of course, we’ll do it to help our party,” Merlino said.

Not only does the ruling party try to stack the deck to retain power forever, but both major parties in America, the republicans and democrats, want to ensure that they—-and only they—-will be the ruling parties forever and then some. So the system seems designed to ensure that new parties—-parties other than the democrats and republicans, both parties of big and bigger government—-never have any significant chance to win or even sometimes get on the ballot.

And even mavericks within the two ruling parties—-such as Teachout, the Fordham University law professor who dared to oppose Cuomo in the recent party primary—-are told by party leaders to get lost. Don’t even run, they are warned.

For example, Governor Cuomo spent lots of money in a futile attempt to get Teachout kicked off the primary ballot. But the worse thing happened from the viewpoint of Cuomo: The courts disagreed. The voters, those who bothered to show up, were actually allowed to have a nominal choice.

And Teachout, with a snowball’s chance in hell of winning the primary, actually did better than expected. She received about 30 percent of the vote. Even many of the people who voted for Cuomo were quoted in the papers as saying they don’t like the governor.

My guess is that his consistent refusal to debate his primary opponent is why even people who voted for the governor don’t like him. Most people agree Teachout had little chance of winning, yet he still ignored her as though she was carrying some rare virus. However, Cuomo, who is far ahead in the polls and in raising money for the fall general election, is starting to hedge on debating his major opponent, Westchester County executive Rob Astorino, a republican.

Will He or Won’t He?

Cuomo now says he might debate. But even in acknowledging the need to debate, Cuomo—- as well as his principal opponent, Astorino—-show the arrogance of a political ruling class. This group seems to take for granted the average citizen, as well as the endless taxes he or she his pays to keep them in tall cotton.

Let’s look at the Cuomo/Astorino statements on general election debates. Cuomo, feeling the sting of countless commentators, now says “I believe there will be debates.”

Gee, thanks so much, gov. How many?

Cuomo won’t make any commitment on that yet. Indeed, he says, debates should never be mandatory.

The voters don’t always deserve to hear the candidates debate the issues? Not exactly, according to Governor Cuomo.

And who, I ask, is to decide what is “a disservice to democracy?”

What a silly boy I am! The answer is obvious even to a Benighted Bunkerland Babbitt (yours truly).

Why the governor will decide whether he’ll debate and how many times, not some third party that is unconnected with any candidate. Oh, and maybe someone thinks, based on my recent tough comments directed toward our Hudson Hammurabi, that I’m throwing back drinks with the governor’s main opponent, republican Rob Astorino. Not at all. I find his attitude, in some ways, also as myopic and arrogant as that of our governor.

He’s no Hero of Mine

Astorino precluded anyone—outside of himself and the governor—as worthy of serious consideration so only those two should debate. Here’s what he said about debates: “There are two people now who can win—me or Andrew Cuomo.”

There you have, fair citizens. Only the republicans or democrats—-the two parties that have made the mess in our state and our nation—-can debate. All other candidates and all other parties are not even to be allowed to participate in debates. Apparently all knowledge and improvement can only come from our two ruling parties. Anybody else should pack up and head to another country.

There’s a simple way to ensure that the major parties that win 99 percent of the elections today are heard as well as those offering new ideas: Have lots of debates.

Why not have a dozen gubernatorial debates? In six debates, only the two top candidates would debate.

And, in the other half of them, all the candidates that have made it on the ballot—-and it is difficult in New York to get ballot status because it requires a large number of signatures—–get to debate and offer their ideas, many of which will be very different from Cuomo and Astorino.

And that is a good thing!

As countless enlightened thinkers from John Milton to John Stuart Mill to Judge Learned Hand have reminded us over centuries, diversity in thinking is a critical element in the advancement of human beings. It is the maverick who often discovers the truth. And who was Copernicus, but a maverick who insisted that most of his contemporaries were wrong?

What would 16th century versions of the Cuomos and Astorinos have said of him? “Get out of the way, Copernicus, people only want to hear from the big boys of astronomy.”

What’s wrong with creating a forum for different, possibly unpopular, points of view?

Apparently a lot according to our governor, who arrogates to himself the power to decide what is a service and what is a “disservice to democracy.” On this point, Astorino tacitly agrees. He and Cuomo, he says, are the candidates “who the public should be listening to.”

Astorino claims only he and Cuomo will provide “a substantive debate on the issues and not a circus.”

I disagree. Given the relentless mountebankery and flim-flams of the average major party pol, give me the circus everytime.