You worked so hard and prepared so much for a dream job and then, in a few minutes, you throw away a wonderful opportunity. And it could be for as ridiculous a reason as you have the wrong address of the company or eat too much before your interview.

That’s the warning of job pros I recently spoke to for a story. Yet, they add, if the job applicant takes a few commonsense steps, he or she can greatly increase the chance of doing well on that critical job interview.

First, says business consultant Lisa Quast, remember the basics. The job hopeful should be prepared to provide a company with the right credentials and demonstrate standard skills required for a job.

“A lot of applicants think they will razzle dazzle you, but forget about the basics,” says Quast, a former Fortune 500 executive who has interviewed many job hopefuls. She also says it is important for an applicant to review the skills required of a job.

“Then go through them one by one and show that you have them,” she says.

Quast, who spent twenty years climbing the corporate ladder, is the author of “Secrets of a Hiring Manager Turned Career Coach: A Foolproof Guide to Getting the Job You Want Every Time.”

“It amazes me that people often show up for job interviews unprepared; without appropriate business attire and without a clean resume,” says Robin Friedman, New York City branch manager of the Creative Group, which recruits marketing and other professionals.

First impressions—how someone presents himself or herself, how prepared one is—are critical, she adds.

“Job seekers should be doing everything they can to tip the scales in their favor, including paying attention to the smallest detail,” adds Diane Domeyer, executive director of the Creative Group.

Job applicants should, Domeyer advises, avoid superfluous information in a resume or on an interview.

Will You Make These Mistakes?

What hurts a job applicant in the eyes of someone who is hiring?

Complaints about previous employers. Another red flag, according to a recent poll, is the inappropriate use of telephones. (See chart below for Creative Group poll).

“Checking your smart phone isn’t a smart move during a job interview,” according to the Creative Group research.

“In fact, it’s the most common way to blow your chances with a prospective employer, the Creative Group said. Some three quarters of advertising and marketing executives said ‘it’s likely’ they’d remove a candidate from consideration if the person used his or her phone during the interview, Creative Group said.

How to Do It Right

Here are some job interview tips from employment pros:

Be sure you have the correct address and phone number. Verify these online by checking the company website a few days ahead of time. Also, given the potential problems of the subways and other mass transit, always allow extra time to ensure that you arrive on time. Quast says this is so important that possibly you should consider a test run to the office a day or two before the interview.

*Have the Correct Spelling of the Job Interviewer

“It always surprises me how many people show up for a job interview and can’t remember the name of the hiring manager or even the job title of the position they’re interviewing for,” Quast says. “Don’t be one of those people.”

*Be Sure to Have Enough Time for a Job Interview

You’re having a very promising job interview. However, you have scheduled another interview in thirty minutes and now have to break off the first interview. Your scheduling woes may have cost you one or two potential jobs.

*Go to the Bathroom before Leaving Home

Avoid too much coffee or other liquids shortly before an interview. If you need to use the bathroom when you arrive at the company, ask the receptionist to point you to it before the interview. 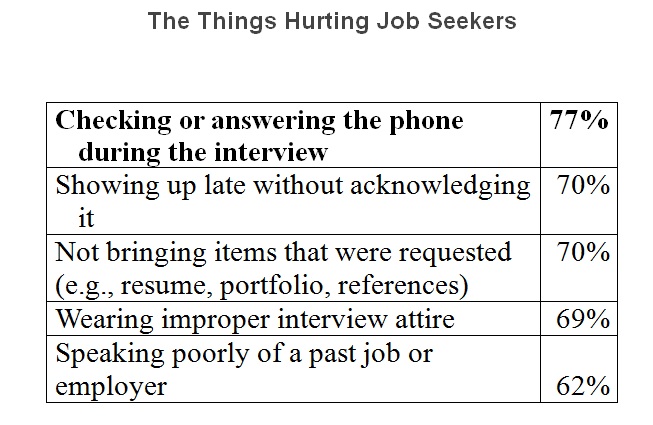